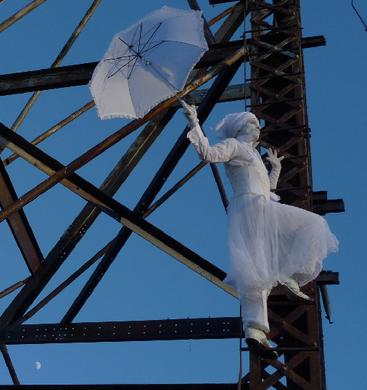 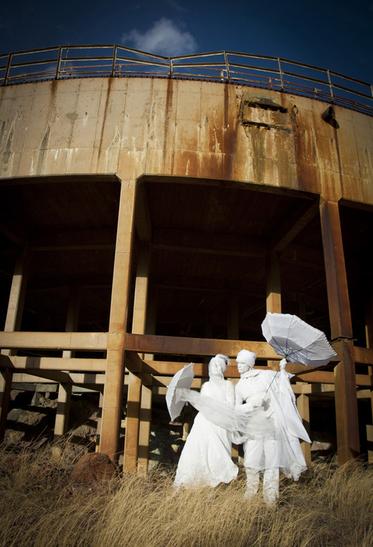 Remixes of the Arizona landscape

An original site-specific devised work that explores the beauty, poetry, and fragility of the desert, the reality of water shortage, and the prospect of Phoenix becoming one of the largest ghost towns in the world when our water supply runs out–Phoenix as a mirage. Title inspired by T.S.Eliot's The Wasteland.

If you wander through the Arizona desert from town to town, one notices an abundance of an unusual phenomenon—ghost towns. Scattered throughout the Arizona landscape are abandoned towns and dwellings that once prospered. Arizona has over 450 ghost towns, more than any other state in the United States. Now, their fragmented remains echo and remind us of life that once filled these spaces.  The one common thread that links these abandoned dwellings is the reality that resources ran out and living in these locations was no longer sustainable or even possible. They are haunting reminders of what happens when resources vanish and one is forced to relocate in order to survive.

There are predictions that there is a one hundred year lifeline of water left in Phoenix. What happens when that runs out? Without water, Phoenix could be the largest ghost town on the planet as urban dwellers flee to find resources. Phoenix could be understood as a mirage and entirely unrealistic in terms of long-term sustainability. As the urban sprawl continues to expand in every direction, these already limited resources are stretched to a tipping point. While the idea of Phoenix as a ghost town is inherently apocalyptic, it could become a reality if measures are not made in the near future to protect the fragility of our water supply.

While one could easily read the facts and spreadsheets that indicate this impending water shortage, this project approaches this topic through a visual, somatic, sonic, and theatrical investigation that both celebrates the beauty of the desert and its unique ecosystem as well as expose the inherent threat to life in this place and the rapidly diminishing resources

For the first phase of the project, I received a $5000 Herberger Institute Research and Development grant to collaborate with Tucson-based artists Verbobala (Logan Phillips and Adam Cooper-Terán) and SonicAnta (Glenn Weyant) to capture and document selected ghost towns around Arizona through sound, video, and performance. Our first expedition to the abandoned towns of Gleeson, Pearce, and Courtland in Cochise County occurred in October, 2010. Our second expedition to various sites around Bisbee, Arizona occurred in February 2011.

Moving in slow motion, Transfix figures silently moved around and between the remains of what used to be a hospital, a flourishing mine, a jail, and other traces of once lived in spaces. We attached sensitive sound recording devices to the ruined buildings to essentially “play” the ghost town by tapping on the structures.  We recorded the natural soundscape of insects, birds, wind, grass, and crickets mixed with the gnarled metallic, rusted barbed-wire, broken glass, and abandoned mine shafts. Poet Logan Phillips would respond directly to the sites by writing poetry on-site—these sounds and texts were later recorded and woven into the performance.