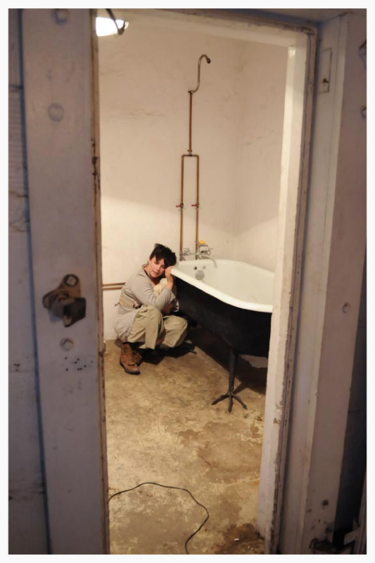 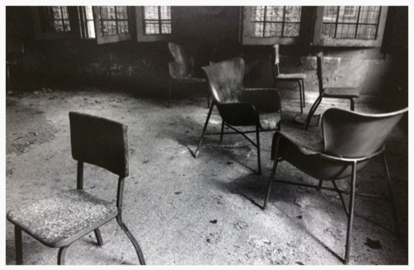 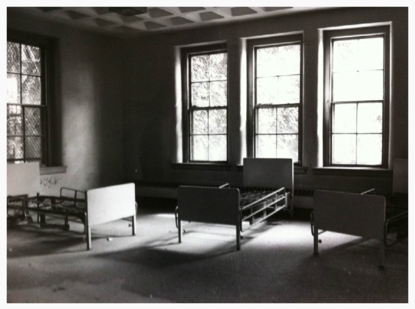 Asylum was an immersive site-specific devised work investigating the history of women, writing, and insanity through images, movement, words, and text. The harrowing history of women and madness reveals a dark and disturbing past of confinement, torture, and misdiagnosis. As an artist, I am fascinated by how we, as a society, define insanity and how this definition has shifted historically throughout time. The term “asylum” is historically bound and has fallen into disuse—recalling images of white padded cells, barred windows, ‘continuous bath time,’ electroshock therapy, and other practices that have controversial histories etched into the public imagination. Much of our image research revealed hundreds of abandoned asylums, haunting reminders of a forgotten past—empty hallways, rows of bathtubs, cracked windows, rusted doors to solitary confinement, gurney’s with worn leather straps, stained mattresses, and shattered dreams.

Asylum was the third installment of a devised performance triptych, The Muse Trilogy that began in 2006 with The Ophelia Project, a poetic portrait of the lives and writing of Virginia Woolf, Anne Sexton, and Sylvia Plath and Memory Room, a durational performance/window installation about women, writing, and memory commissioned by INFLUX 3, Scottsdale Public Art 2013. The connective thread that binds all three works in The Muse Trilogy is women and writing, in particular, stitching in themes of mental illness, addiction, memory, and suicide.

The piece was largely inspired by Ten Days in a Mad-House written in 1887 by a reporter Elizabeth Cochrane, under the pseudonym Nellie Bly, who feigned insanity to be admitted to the asylum on Blackwell Island in New York. This resulted in Ten Days in a Mad-House, which exposed the horrific treatment of the patients, in particular, women. Her reporting led to a radical reformation of mental institutions in the United States. system. We used this source material to structure the main frame of the performance. We developed characters inspired by historical figures we unearthed in our research; Zelda, Renee, Charlotte, Nelly, Mrs. Chenoweth etc; however they were not bound to their historical narratives, we used them as launch points to create new characters based on historical research. Each episode included a movement sequence; for example—a bathtub ballet, a chair symphony, a hospital bed duet, and the Thorazine shuffle. The quality of this piece was intensely physical, haunting yet beautiful, disturbing yet delicate. Working with choreographer Eileen Standley, we developed a somatic movement vocabulary based on the body systems and experiential anatomy. As the audience moved through a series of ‘micro-environments’ they had the ability to create their own experience from multiple vantage points.

Over the Spring 2013 semester I assembled a dramaturgical research team consisting of two MFA performance graduate students, Julie Rada and Chelsea Pace, and two School of Film, Dance and Theatre undergraduates, Shay Webster and Jennifer Strickland, in a weekly independent study to conduct dramaturgical research into the history of insanity and women in the United States. Our journey lead us through diaries, journals, articles, books, images, and films resulting in a 100-page document that was our source material for developing the performance. We identified key themes, images, soundscapes, characters, and narrative arcs.

The performance occurred in the historic Ice House in Downtown Phoenix. It was the first immersive theatre performance of its kind in Phoenix. The audience moved through ten rooms over 3 floors of the building, free to roam where they chose. The mobile audience experienced the performance in fragments, much like a person with schizophrenia encounters everyday life. The entire Ice House was filled with a soundscape that filtered through all three floors as well as focused sound environments. Rather than transforming the environment, we augmented it to enhance the already asylum-like quality of the space exposing the wires and inner workings of the space—like the interior of a body. We had 44 TVs scattered throughout the space with surveillance cameras to convey a sense of surveillance and panopticon—that the inmates were being watched at all times. The costumes were a uniform that conveyed an institutional quality and also allowed for extreme movement. In the large room, we had an aerial rig where one of the inmates was suspended above the audience. 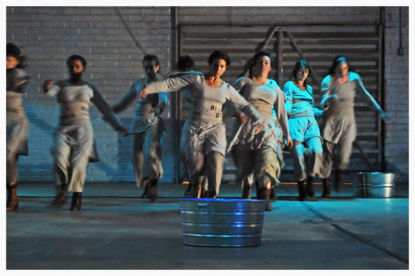 Part III of the Muse Trilogy