A map of the world that does not include Utopia is not worth glancing at, for it leaves out the one country at which Humanity is always landing. And when Humanity lands there, it looks out, and seeing a better country, sets sail (Wilde, in Parrington 1964: viii).

Reflecting on the EMERGE 2015 theme 'The Future of Choices and Values,' Abraxa is inspired by Thomas More’s utopian island Abraxa depicted in Utopia (1516),  where he coined the term ‘utopia’ blending two Greek words: topos or place, and u that means ‘no’ or ‘not’. Thus, utopia can be translated as ‘noplace’ or ‘nowhere’ (Claeys Sargent 1999:1). The theories surrounding utopia have evolved from abstract literary, fictional utopias—blueprints for a new ideal model for living in the world—to concrete utopias realized in time and space. Utopians can be seen as visionaries representing the noblest aspirations of humanity. As many have argued, the utopian impulse can be seen since the beginning of the written word; the desire to dream of a better world what could be considered a form of social dreaming. Often these utopias emerge as a direct response to the society the author is currently living in—as a literary imaginary projection of a radically different society.  Ernst Bloch and others have noted that utopia can be defined as the anticipation of the ‘not-yet-conscious’ (2000:191). Performances are a microcosm for studying and understanding the ‘not-yet-conscious’ of a given community, which is ‘knowable, to some extent, as a utopian feeling’ (Muñoz 2009: 3).  Through utopian imaginaries, we can begin to imagine different futures—the possibly of a better world. 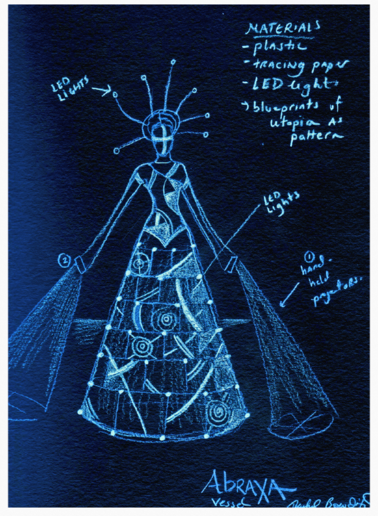 Window installation at the ASU Brickyard Ceramics Center with performances at the ASU Art Museum and Sky Song February and March 2015.